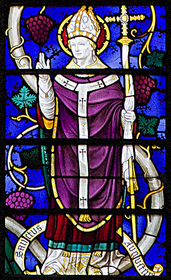 Saint Augustine of Canterbury
Anglicanism is a tradition within Christianity comprising churches with historical connections to the Church of England or practicing similar beliefs, worship or church structures. The Progressive Episcopal Church shares in the Anglican Heritage of the ancient Christian tradition and is organizationally independent of the Church of England and the See of Canterbury.

The word Anglican originates in ecclesia anglicana, a medieval Latin phrase dating to at least 1246, which means the "English Church". The earliest historical evidence of Christianity among the native Britons is found in the writings of such early Christian Fathers as Tertullian and Origen in the first years of the 3rd century. In 597, Gregory I (Gregory the Great) sent Saint Augustine of Canterbury from Rome to evangelize the Angles. This event is known as the Gregorian mission and is the date the Church of England generally marks the beginning of its formal history. A history of Anglicanism can be found here...

Anglicanism was born in a creative tension between tradition and reform, and quickly became a 'via media', or 'middle way', between Roman Catholicism and the Reformation. The Progressive Episcopal Church is inspired by the Anglican tradition as a viable, authentic and relevant way to be Christians in the 21st Century by maintaining continuity with the ancient Christian Church and simultaneously accommodating the changes new situations (social developments), discoveries (scientific developments) and evolving faith (theological developments) require. 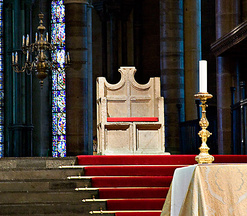 The Chair (Cathedra) of Saint Augustine
The See of Canterbury, England and its Archbishop are central historic figures and symbols of Anglican heritage. The Archbishop of Canterbury is the senior bishop and principal leader of the Church of England, the symbolic head of the worldwide Anglican Communion and the diocesan bishop of the Diocese of Canterbury.

Although organizationally independent of the Church of England, the Progressive Episcopal Church honors the historical significance of the episcopal See of Canterbury since its founding in 597 CE.

In modern times, a series of voluntary meetings, particularly the Lambeth Conference (established in 1867), the Consultative Council (founded in 1971) and the Primate's Meeting (started in 1979), serve as instruments of communion for some Anglican bishops and their communities. Because these meetings possess no legal or ecclesiastical authority, and because Anglican identity is not based on the attendance of meetings, not all Anglican bishops or communities participate in them.

In the historic spirit of Anglican autonomy and in faithfulness to the all inclusive and liberating nature of the Gospel of Jesus Christ, the Progressive Episcopal Church, together with many other Anglican communities, does not officially participate in these meetings and does not necessarily embrace all resolutions, 'covenants' or statements they publish.